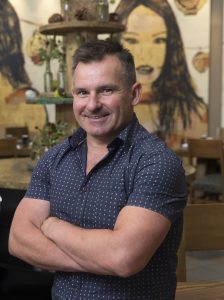 When John McLeay fell into cooking, the thought of regular travel to Asia as part of his job was not even a consideration. Fast forward to the present and John does just that with his role as Executive Chef at the Apples + Pears Group taking him on regular trips to Thailand, Vietnam and surrounds. These regular sojourns help to fuel John’s passion and expertise for South East Asian cuisine.
With extensive experience under his belt from restaurants such as the Livebait, Botanical, No 3 Station Pier and the Establishment, John was a natural fit when he accepted the reins at Red Spice Road in late 2007. He quickly cemented his reputation behind the woks of this iconic laneway restaurant, with The Age Epicure lauding his food as “uniformly impressive”.
If one were to corner John to ask his influences, his response is usually threefold namely Melbourne, Work Experience and Travel.
Firstly, his hometown Melbourne – a hotbed of inspiration that is second to none. John loves eating out and enjoys the wonderful variety this great city has to offer. He is proud of his contribution to the food scene in Melbourne and takes great joy in enjoying its fruits. He is a regular in the foodie circuits and is well known and respected by many of his peers – a rich reward for his steadfast dedication to the industry.
Secondly, his resume tells a story of hard work and mentoring that has brought him to where he is today. From his time as a young apprentice at the Australia Hotel through to now, flashes of his past can be seen in both his leadership and his menu style. But of all his experience, he proudly nominates his time under Cath Claringbold at Livebait as his most influential. The discipline and knowledge gained from this internship has tooled him for life and has been tantamount to his success at Red Spice Road. It was this close mentorship that encouraged John to share his knowledge through the William Angliss Great Chef’s program and reciprocal work experience through Hanoi’s KOTO (Know One Teach One).
His proudest achievement has been the publication of the Red Spice Road cookbook, which is currently in its third reprint, selling over 10,000 copies in twelve months.
And lastly, his regular trips to South East Asia ground his knowledge in traditional methods and ingredients. He uses this knowledge to design dishes that appeal to the Western palate, whilst avoiding the overly used Modern-Australian moniker that is bantered around much too frequently. His favourite pastime is wandering through the cities and villages, sampling the different street food along the way, marvelling at and learning from the speed and freshness of the locals and reflecting on ways he can adapt it back home.
Come and try John’s lovingly prepared dishes at Red Spice Road, Red Spice QV and Burma Lane.

Boozy Brunch is back @ Burma Lane!