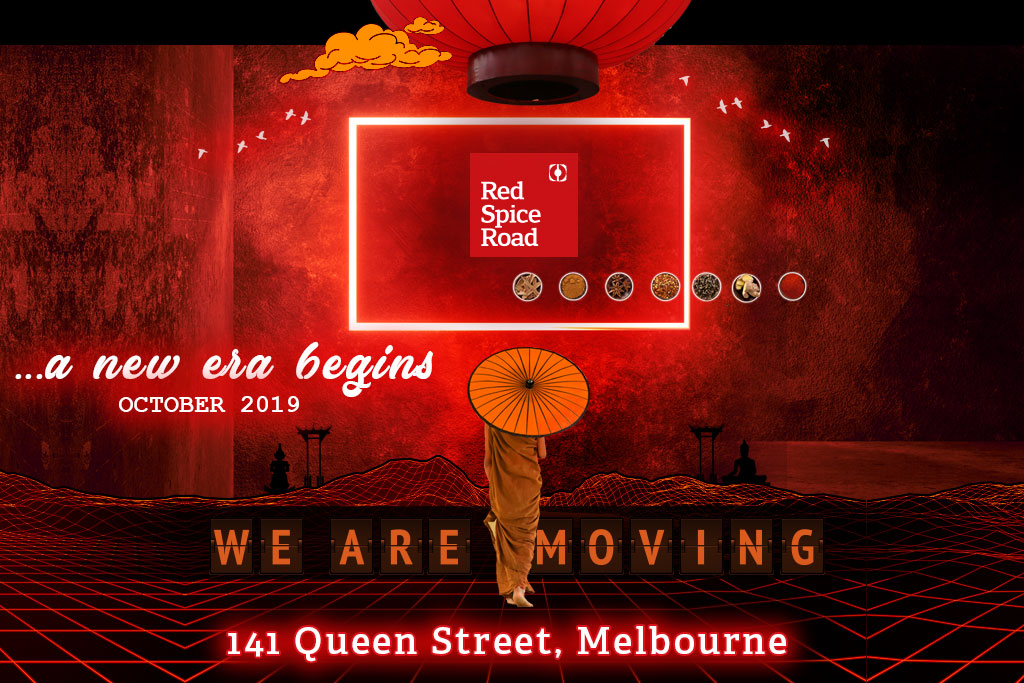 Melbourne’s favourite modern Asian restaurant, Red Spice Road, is moving from its McKillop Street location to a new space only 100 metres away at 141 Queen Street in October.

Due to an impending redevelopment of the McKillop Street area, Red Spice Road will close at its current location in October 2019 and move to its new home. But the great news is that the restaurant, as well as its much-loved murals, showstopping red lantern, creative culinary team led by head chef Sungeun Mo, and of course, Melbourne’s favourite pork belly, will be back better than ever at a gorgeous new space on Queen Street in October 2019.

Join the Red Spice Road team for a massive farewell party to McKillop Street on Saturday 24 August. There’ll be a hawker style food market, with a DJ, roaming food and cocktail stations, and even a lion dance. Book tickets for this limited capacity event at www.apeg.co/farewell-mckillop-street/

The new Red Spice Road location is the former FGY Art Gallery on Queen Street and is only a two-minute stroll from the current restaurant. Featuring full length windows and cathedral ceilings, it’s a stunning theatrical and light-drenched space to continue Red Spice Road’s evolution and the complete sensory experience that the restaurant creates. The jaw-dropping David Bromley artworks will be moving to the new site and the Mike Eleven murals from the McKillop Street space will be recreated as graphics in the private dining rooms at Queen Street.

The kitchen team will be led by newly appointed head chef, Sungeun Mo. Mo is a long-term Red Spice Road employee, joining the team three years ago when she moved from Korea and recently being promoted to lead the kitchen team. We’re excited to be moving to our new space with a Korean-born female head chef to lead the next chapter of Red Spice Road’s story.

As well as the new location, Red Spice Road is introducing a new a la carte menu and beverage program. New dishes on the menu at Queen Street will include: